It's Warm In There! – Lessons on Color Temperature

One sunny, breezy day over twenty five years ago, I was painting boats at a picturesque harbor on the Maine coast with my teacher and mentor Ned Jacob. There is some sort of special hell reserved for artists painting boats, especially boats that are moving. bobbing up and down and generally not staying still! But, on this day, it wasn’t drawing that had me totally flummoxed. I love watching Top ly fishing reels and I was painting a white fishing boat moored nearby and felt I had a pretty good drawing of the structure. But, as I tried to paint the interior of the cabin, which was in shadow, I could not make it look right. It looked like a flat piece of paint rather than an area receding away from the outside of the boat. I had a nice pile of grey paint that looked like the right value for the shadow. Ned looked over my shoulder and said “It’s warm in there.” Then he picked up a speck of cad orange with his brush, dropped it in my grey and applied it to the canvas in one deft stroke. It went back, it had “air”, it was warm in there! It was my first lesson in color temperature and I never forgot it.

Color temperature seems like it ought to be a really easy concept, but in my experience it is both hard to understand and, for the inexperienced, even harder to see and therefore to paint. One thing I learned from Ned was where to look for it- where and how to identify places that might hold a color temperature change. Once I knew where to look, then I saw it everywhere!
It was several years later when I read that well known adage “break temperature not value” in Birge Harrison’s book Landscape Painting. It took a while to understand how color temperature and value can be used together to create not only solidity of forms with an economy of values, but will also be the most effective combination to produce the illusion of light and atmosphere in the landscape. Although you can depict it with well organized values only (convert master paintings to greyscale if you doubt that!), the combination of an economical value structure with strategic color temperature shifts will positively make a painting sing!
Here is a painting by American artist Clark Hulings (1922-2011) that illustrates this point. Notice the color of the wall in shadow. The cooler color above is influenced by the sky while the warmer color in the lower part of the wall partakes of the reflected color from the ground. Both the warm and cool notes within the shadow are different temperatures, but the same value! 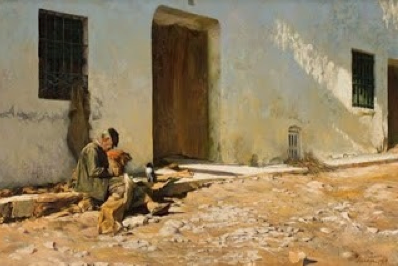 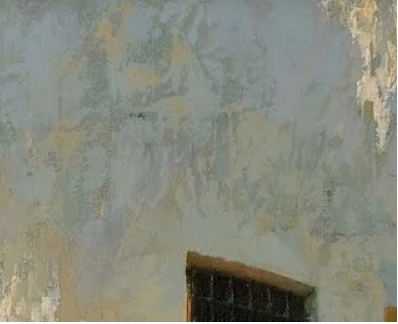 In the next post, we’ll explore other examples of where to look for color temperature changes. Stay tuned!
P.S. Our online class Practical Color Mixing for Landscape Painters I starts January 31, 2020. Learn how to unlock the secrets of hue, value, chroma and color temperature. Join us!