What is Indirect Painting? Part I

Most of you are direct painters. This is the primary way that oil painting has been taught for the last century or so, although indirect painting held sway prior to that. I was trained to work in a direct, alla prima way as many of you have been. When I decided to explore indirect painting techniques, there wasn’t a lot of information out there, especially for landscape painters. So, it took years of research- study of past masters, as well as art history, and texts on methods and materials- to figure out a bit about this way of working. Even today, there are just a handful of landscape painters who are using these methods.
Indirect painting simply means that the surface of the painting is built up in layers rather than all in one go. There are many different ways to do this. All of them rely on creating distinct layers of paint which will create a different optical effect, a different “look” than a work painted directly in opaque paint. This is achieved by using transparent, translucent and opaque passages and building up the painting in layers.

Before we explore the technical side of indirect painting, let’s look at a little art history.  Prior to the late 14th century, the medium of egg tempera was used for painting. The earliest oil painting technique was developed in Flanders in the late 14th and early 15th centuries. As a result this method is referred to as the Flemish technique. Using a wood panel, artists transferred a highly refined drawing onto the panel. The drawing was then restated in ink or thin paint and sealed with varnish. Once that was dry, the artist would commence painting transparent glazes into the shadows and applying layers of thin translucent or opaque paint into other areas. Each layer of paint was allowed to dry before continuing work and the painting was finished by adding subsequent glazes and building up the lights with opaque paint. Highlights were finally added with thicker opaque paint. This produced a highly realistic, more linear image, usually with fairly hard edges.
Here is a painting by Jan van Eyck  (Flemish, 139-1441) executed in the Flemish technique. 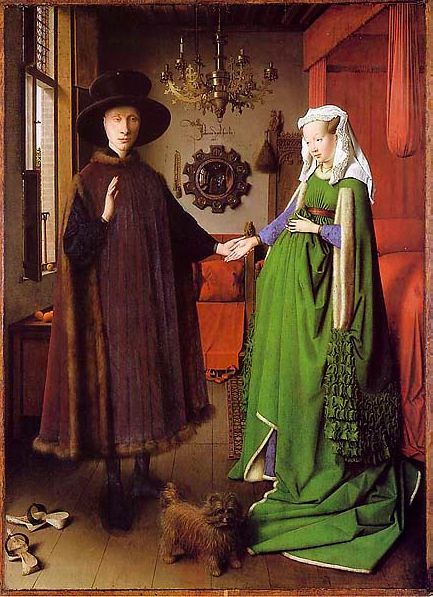 The new innovations of oil painting spread like wildfire throughout Europe. Italian artists in particular adopted the new medium although resistance by some (including Michelangelo) remained.  By the late 15th and early 16th centuries Venetian artists, particularly Titian (1488-1576) and Giorgione (c.1477-1510) began to invent further innovations to the Flemish technique. The limitations of working on wood panels and the difficulty of making alterations to a work in progress sparked a shift to the use of a canvas support and a more painterly process for execution which is called the Venetian technique.
The innovations of the Venetian technique involved the use of canvas, stiff brushes and an underpainting rather than a drawing. As a result, the edges in paintings produced this way tend to be softer and the resulting work more atmospheric and painterly. Generally the underpainting was executed either partially or completely in opaque paint and was called a grisaille when executed in neutral greys. After the grisaille dried, glazes would be applied to the shadows and the light areas built up with thin opaque paints. Titian is generally credited with “inventing” the scumble (light opaque paint applied as a translucent layer) and the velatura or semi-glaze which can be transparent or translucent.


Eventually use of the Venetian method and its many variations became widespread all over Europe and was used for centuries by masters such as Rubens, Vermeer, Rembrandt, Poussin, and Ingres.

Indirect painting, using the Venetian method or its many manifestations, offers the artist the widest range of options for both application of paint and optical effects which can be achieved.  In Part II we’ll find how how and why!

P.S. Our annual online class Painting the Luminous Landscape- Introduction to Indirect Painting for Landscape Painters- starts July 10th. Come see what all the fuss is about! Join us!