Carlson’s Theory of Angles- An Introduction

It was over 20 years ago when I first got my hands on a copy of Carlson. I had wandered into the bookstore at the Scottsdale Artist’s School trying to escape the overwhelming odor of maroger and of course went straight to the landscape section, which was what I was really interested in. I picked up a copy of Carlson’s Guide to Landscape Painting, planning to read it on the plane on the way home to Florida. The next day, somewhere over Texas, I had an epiphany. I had reached Chapter 3, and all of a sudden everything made sense. Carlson’s book is considered the bible of landscape painting by most contemporary landscape painters and his Theory of Angles is perhaps the cornerstone of that well deserved reputation.
Now, let’s go to our friend the all-knowing Mr. Carlson. Chapter 3 – the Theory of Angles- is the place to go to understand values in landscape painting (and drawing). The Theory of Angles is the best way to sort through and organize values in the landscape and your thinking about them. Although there are exceptions to it (as there are to all rules), generally speaking it is the best guide you can use. So, if you have not read it, read it now. Right now! If you have read it, go back and read it again!

Carlson’s Theory of Angles is based on the organization of the landscape into planes- the sky, the ground plane, slanted planes and upright planes. 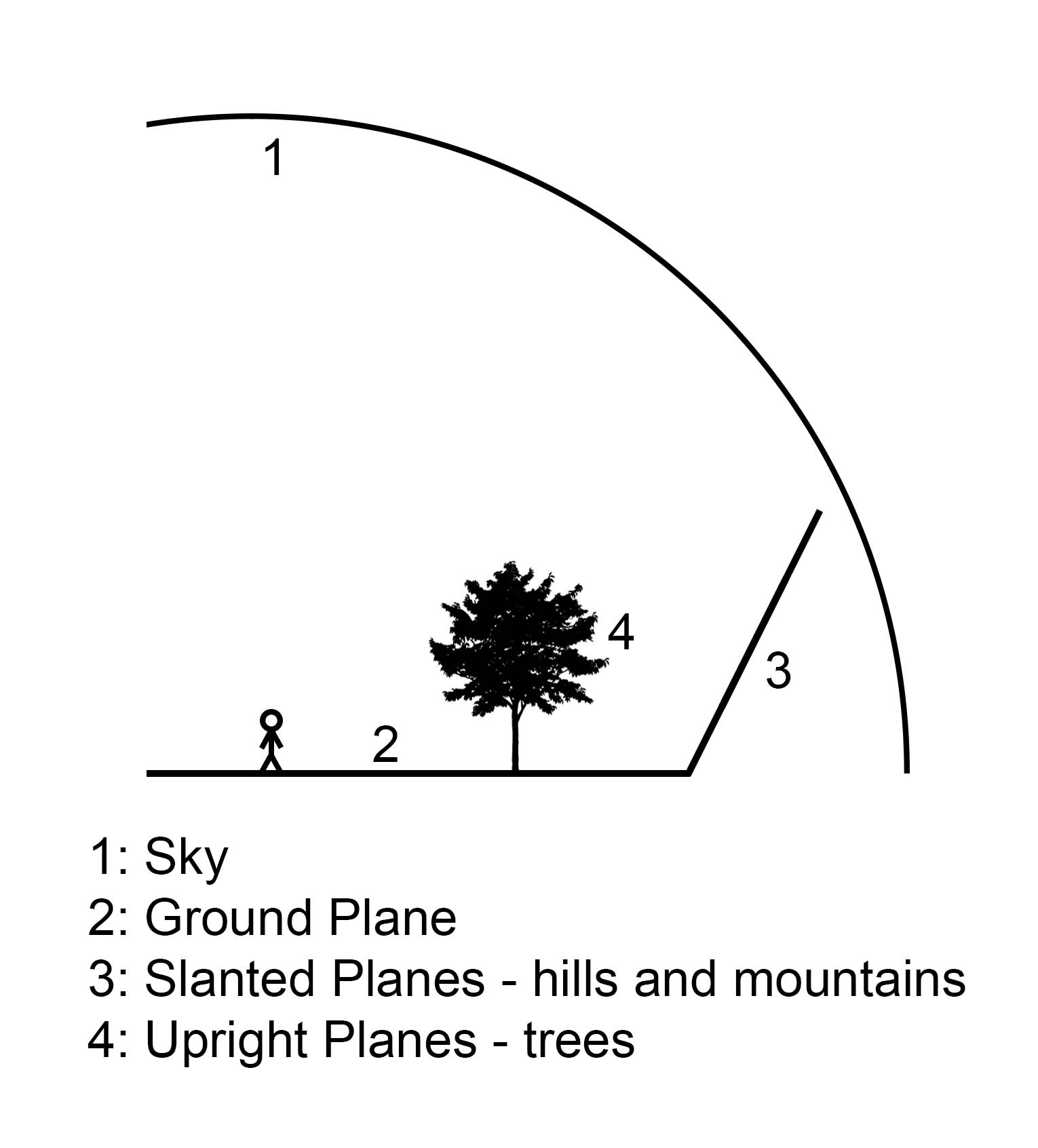 Carlson tells us that the sky, as the source of the light in the landscape,  will generally be the lightest value  – so values 91/2 to 7 on the scale above (on a sunny day). In our previous posts on skies, we saw how those values would grade from light to dark from the horizon to the zenith, and from light to dark nearer the sun and moving away from it. The next lightest is the ground plane, which because it is a flat plane receives the most light from the sky. On a sunny day those values would be in the 8-7 1/2 range in the light and a 6 in the shadows.  Slanted planes like mountains and hills come next- values 5 and 4, and upright planes like trees are the darkest 4-2. A dark accent would be a 2-1. These values would be present on a typical sunny day, when there is the broadest range of values present in the landscape. It is that broad range of values which creates the illusion of a sunlit day.
Think of each one of these value groupings as a value “family”- a discreet separate group of values. Each plane of the landscape has its own value group. So, for example, the darkest value in the ground plane (a shadow on the ground) is lighter than the lightest value in the trees ! 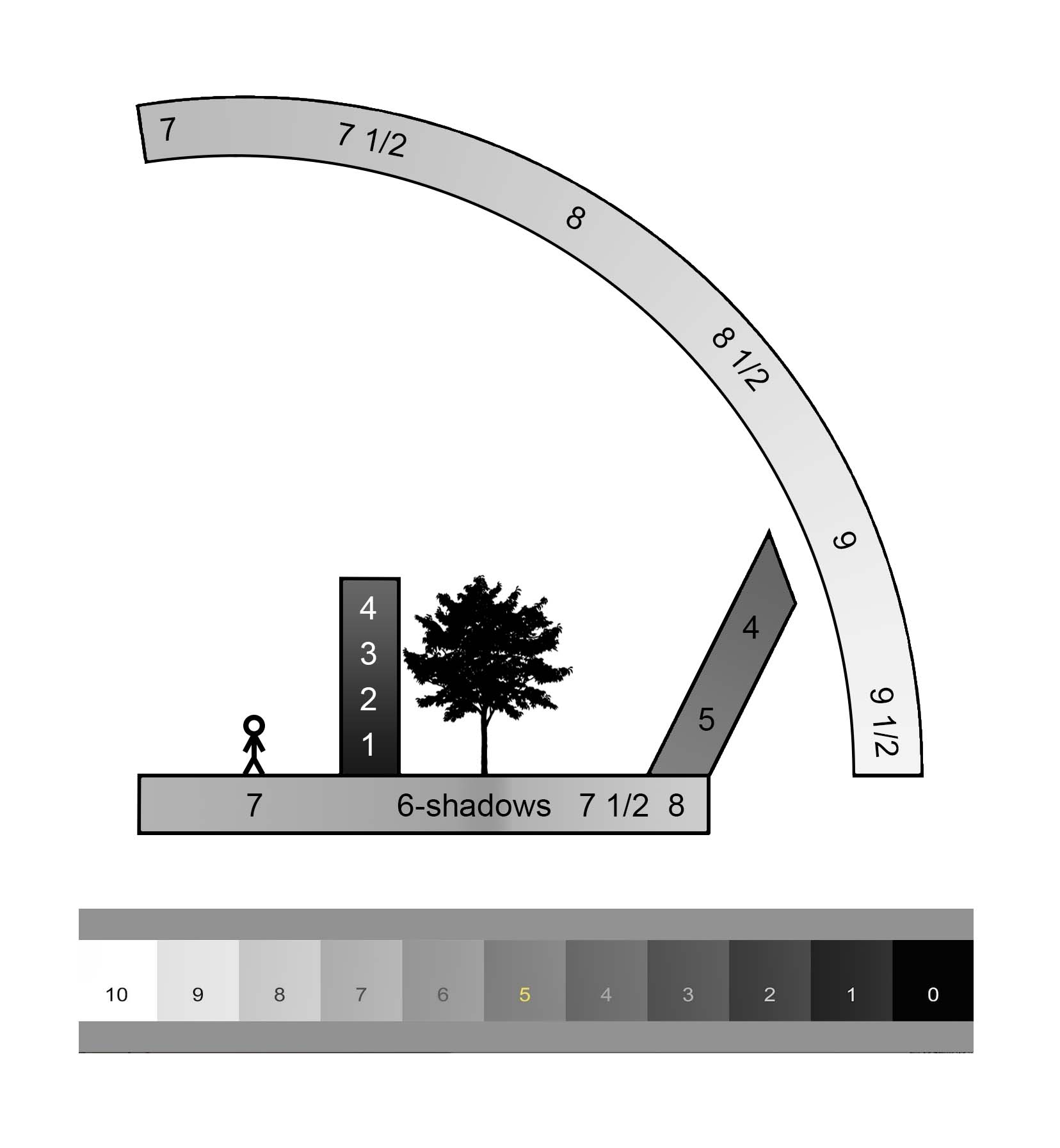 When you first begin to think about the landscape in planes and to try to assign those values to the landscape, it can be helpful to keep each “value family” completely separate, with no overlap of values. In my experience, most students really struggle to keep those planes separated, which is the key to making the painting “read”. In reality you will see some overlap in those value ranges between the planes, and in some lighting effects, those ranges can be very close. But, for now, just keep the idea of the separation of the planes in the forefront of your mind. And read Carlson!

P.S. In our online class Understanding Values in the Landscape we study Carlson’s Theory of Angles and atmospheric perspective (the other great over arching concept which affects values in the landscape) as well as how to “key” a landscape by using the appropriate value range and relationships to create the illusion of different lighting conditions and weather. Class starts January 6th. Join us!