Painting the moonlit landscape has challenged artists for centuries.  Depictions of night time motifs tend to be as much about the ideas we have about the night as they are about what we actually see. As Thoreau said, “the night is a different country” and the shifts in perception that occur in a dimly lit landscape are inevitably influenced by the cultural ideas that surround the concept of night.
The motif of the moonlit landscape has been a popular one since the late 18th century. This was the  Age of Enlightenment and  moonlit landscapes were generally restorative and calm. The moonlight was often augmented by another light source by a reflection of the moon on water. This moon and water combination has become a common nocturne device and is still used in the 21st century. This example by Claude Joesph Vernet, Night a Port in Moonlight (1772) is typical of 18th century moonlit landscapes using both the moon, reflection and another light source (the fire) to illuminate the scene. 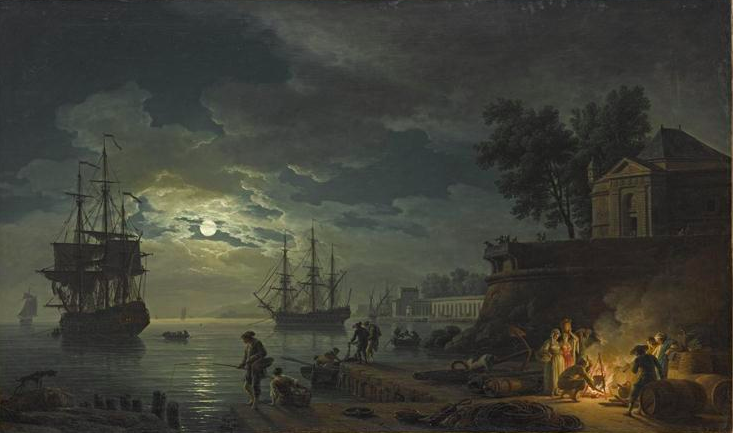 But it was in the late 18th and early 19th century that the nocturne motif came into real popularity. The Romantic impulse in the art, literature and music of that time employed the nocturne as an emblem of the cultural shift from the 18th century Age of Enlightenment to the Romantic Age. The nocturne motifs were used to convey mystery, drama and even a touch of the Sublime. The restorative, calm works of the 18th century were replaced by paintings depicting mystery and the transformative quality of the moonlight to illuminate the metaphysical attributes of the landscapes, and to set up a correspondence between the moonlit landscape and the human mind. This Romantic impulse is still very much a part of the ethos of the contemporary nocturne.
The term nocturne was first used to describe a series of musical compositions by Frederick Chopin in the 1820s. Within the next few decades literary circles in Paris embraced the nocturne, especially the Symbolist poets Rimbaud, Verlaine and Gautier. By the 1860s the motif of the nocturne as a lyrical form of expression that conjured altered states of perception was widely embraced across all the arts. Perhaps one of its best known proponents was James Abbott McNeil Whistler (1834-1903), an expatriate American artist living in London. Whistler, more than any other nineteenth century artist, reinvigorated the depiction of moonlit nights into a modern idiom. He appropriated the musical term “nocturne’ to describe his spare, murky depictions of nighttime along the Thames and in Venice. Whistler employed memory as a major component of his artistic practice, often observing a nighttime motif repeatedly before retreating to his studio to paint it. 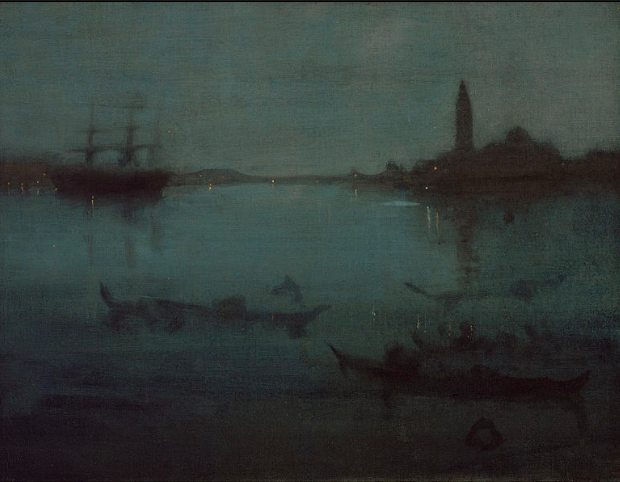 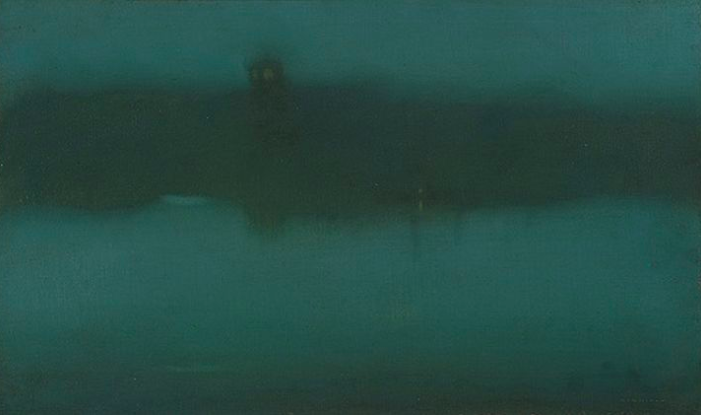 American artists in the 19th century were not immune to the charms of the nocturne motif. Several Hudson River School artists of the mid 19th century employed this romantic trope in service of the first truly American school of landscape painting. Hudson River School nocturnes tend to have more in common with the 18th century ‘moonlights’ than the Parisien ‘nocturne’.

In the last decades of the nineteenth century, the industrialization and electrical illumination of the urban landscape made contemplative moonlight scenes a rarity in real life and perhaps more sought after in art because of that.  Tonalist artists such as George Inness, William Dwight Tryon, Ralph Albert Blakelock, Albert Pinkham Ryder and Charles Warren Eaton were influenced by Whistler and explored the nocturnal realm extensively in their work. The veils of transparent and translucent color and softened forms of the Tonalist style were perfectly suited to a depiction of a moonlit landscape. But the attraction went far beyond technical compatibility. The expression of the mystery and altered states produced by the human experience of night and moonlight were central to the Tonalist aesthetic and to an artistic practice based upon memory.

Perhaps one of the best known examples of nocturnes at the turn of the 20th century  in America was a remarkable series of paintings produced by Frederic Remington. Remington, a well known illustrator, wanted to reinvent himself and seized on the nocturne motif as a way to demonstrate his chops as a fine artist. Remington’s nocturnes are powerful evocations of night painted with a robust facture and implied narrative that leaves no doubt that the night is dangerous territory.

Today the nocturne is alive and well in contemporary landscape painting. Depictions of the night include the urban landscapes lit by artificial lightening as well as the moonlit terrain of nature.

P.S.  Learn how to paint the mystery and beauty of the moonlit landscape. Our online class Painting the Night starts soon! Join us!