Painting students are often encouraged to think of Nature in terms of shapes of color and value. That is a useful idea because it helps to build a solid foundation of design, value structure and drawing into our paintings. But, what to do after our flat color shapes are in place and we wish to impart some of the variety and life we see in Nature? A most useful idea to think about is the concept of gradation.

Gradation is an idea that applies to all of Nature. As John Ruskin, the great 19th century teacher and art critic, wrote in Modern Painters, every part of Nature is in a constant state of variation and gradation.

“Whereas natural gradation is forever escaping observation to that degree that the greater part of artists in working from nature see it not…or, receiving the necessity of gradation as a principle instead of a fact, use it in violently exaggerated measure …. So that we find the majority of painters divided between the two evil extremes of insufficiency and affectation, and only a few of the greatest men capable of making a gradation constant and yet extended over enormous spaces and within degrees of narrow difference.”
John Ruskin, Modern Painters, 1843

” the two evil extremes of insufficiency and affectation ”  <sigh>  Ruskin – you gotta love him!

The same idea is set forth by Andrew Loomis:
“Nature is seldom one flat bright pure color anywhere. In  Nature, colors are made up of variety all through,  which means warm and cool variations, or colors  broken or blended together. The sky is not one  blue, the ground not one green or brown or grey.  The foliage in the distance is quite different in  color than that close by. The charm of color lies  in warm and cool variation* in the greyed or  muted color along with the pure and brilliant. If  you can put three reds together they are more  beautiful than one red, and this is possible by let-  ting the red lean to the warm and cool within the  same area. It is the same with every color in the  universe.”
Andrew Loomis, Creative Illustration (1947)

And John Carlson….. “there is no such thing as a perfectly flat mass in all of Nature!” Carlson’s Guide to Landscape Painting (1929)
In fact, all of Chapter 6 in Carlson could be described as an ode to gradation- so if you want to understand gradation, start there. Read it!

The truth of this, as with all things in Nature, is to go to the source. Step outside and look at the ground beneath your feet and then as it spreads out ahead of you in the distance. Look at the distant trees. Or the sky. Every object in Nature (except manmade ones) will partake of the idea of gradation- changes in value, chroma and temperature within each mass. Sometimes these changes are caused by that mass being partly in light or shadow, or by its recession into distance, or by its distance from the light source. But often, those gradations simply occur as part of the local color of the objects themselves. This quality of variety delights the eye,

Our challenge as artists is to show this beautiful quality of Nature.  So, this is why the idea of creating variety in color through understanding shifts in temperature, chroma and value is so important! It goes to the heart of being able to depict Nature effectively! There are several ways to do this.

Impressionist painters chose to use broken color- exaggerating the gradations in order to emphasize the visual impact they create. Monet is a good example of this approach.  Ruskin might have considered this “an evil extreme of affectation”. 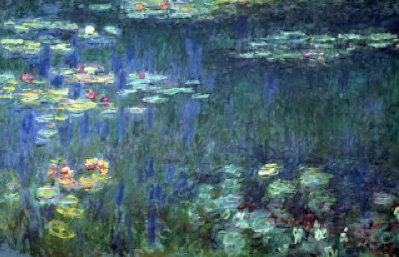   As opposed to this painting by Isaac Levitan which takes a more tonal approach and where the gradations are more subtle and naturalistic.

The idea of broken color in landscape depiction reached a zenith of sorts with the Pointillists. Here is a work by Georges Seurat (late 19th c. French).   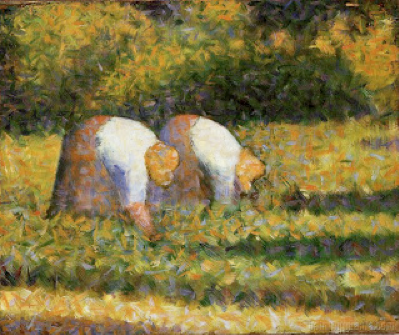 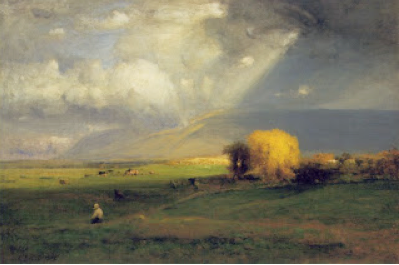 P.S. Want to learn how to create beautiful color harmony through the use of gradation and vibration? How to mix color that sings and is the right value, temperature and chroma? Color that depicts the atmospheric light of nature? Join us for Color + Light, a four week online class starting March 4, 2022! Join us!